Keith Retzer WØKEU contacted SEKARC and asked about getting help with his hex beam that was on a mast that was bent over in a storm. He has limited eyesight and needed some help getting it down. After the coffee today myself KAØEGE, Jack WDØCFH, Dick WD5FMQ and Tyler KBØPQP went out to his home west of Chicopee to see if we could help.

It was a pretty easy job as the mast had bent below the antenna which was only up about 15 feet. We disconnected the coax and the rotor cable, slid the hex beam out of the rotor mount and laid it on the ground. Then removed the mast from it's mount. The mast was a total loss, but the nice hex beam is very salvageable with a fiberglass replacement piece that broke in the fall. Keith just wanted it taken down so it was pretty easy.

Keith was very appreciative and we were glad to help. We got a tour of his garage and ham shack. A shack in which he was able to get USA Worked All COUNTIES..... TWICE and working on a third round now! He operates almost all on SSB and is a very successful and veteran ham operator. On a personal note Keith was my very first HF contact on 10 meters as a Technician Class operator in the tech portion of the band. I heard him QSO with a guy in the state of Washington, called him after he finished that QSO and after our 73's I looked up his call to find out we was about 4 miles southwest of me! Some real HF DX huh !! 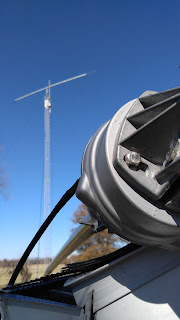 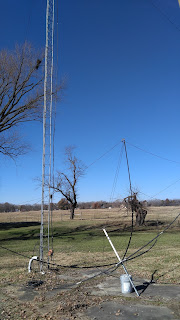 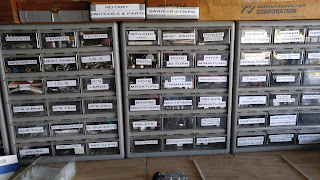