Our first weekly net was a success! We had a total of 7 check ins. Locations varied from Pittsburg, Columbus to St. Paul and even Seneca, MO! Thanks to everyone that participated. We will look for you all again and MORE next week.

We discussed possible meeting days and several items were mentioned that will make excellent topics for the club meetings. Things like SSB on VHF/UHF, SDR ( software defined radio ), foxhunts and kit building.

One of the topics was the Hamfest in Claremore OK in march....  you can find more info at this link. And see the previous posts for additional information !
Green Country Hamfest
Posted by Jeff Chancey on February 27, 2013 No comments: 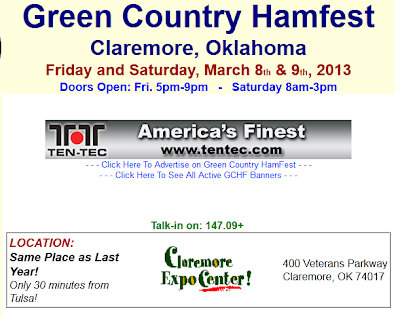 Pleae visit this page for more information !! It looks like there are some VERY nice door prizes !!

Support Our Neighbors !!
Posted by Jeff Chancey on February 27, 2013 No comments:

Beginning on Wednesday Feb 27, 2013 we will begin holding a weekly net at 8 PM. It will be held on the Pittsburg 2 meter repeater on frequency 146.94. All check ins are welcome and encouraged. 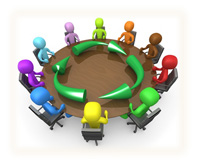 One of the topics to be discussed is organizing a monthly meeting of the new Southeast Kansas ARC. We are looking at possibly the 1st Thursday of each month. But once that is set up and confirmed we will pass the word on during a future net and on this website.

If any of new club members would like to be contributors to the sekarc.net site, please let me know! If anyone has thoughts or opinions on the site, the meeting day or time please let me know. Hopefully this club can turn in to an active and vital part of the Pittsburg community.
Posted by Jeff Chancey on February 26, 2013 1 comment:

ARRL Article On This

In an episode to air in mid-March, the hit ABC comedy "Last Man Standing" -- starring Tim Allen as Mike Baxter, KA0XTT -- will prominently feature scenes with cast members using Amateur Radio. This episode will be the first episode to feature Amateur Radio since the middle of the show's first season.

According to Last Man Standing Producer John Amodeo, NN6JA, the episode called “The Fight” will feature several of the regular cast members talking on the radios. “I can’t say much about the episode right now,” Amodeo told the ARRL, “But this episode has the most significant use of Amateur Radio in a TV comedy since Herman Munster, W6XRl4. got his ham license.” Fans of 1960s television will remember the episode of The Munsters (originally aired January 21, 1965) when Herman, on his ham radio, overheard children using walkie-talkies who were pretending to be Martians.