I love interference stories. I was Licensed in 1977...It was about 35 years ago I found myself in an interference problem I think it was on the 146.82 repeater...someone had left their mic keyed up for some reason. Who knew? The repeater was timing out constantly and was a big annoyance. I decided to do something about it.

So on the auto patch 146.91 repeater...I called my friend Al NØFOT (now Sk)..."Hey Al, turn your Stacked 16 element 2 meter beam around and get a bearing on this signal....."Due West" from his Northern Roeland Park Location He said.... Al was quite apathetic—"just let the radio burn up who cares" he said.

But, I took it as a challenge.

So, armed with just an Icom 2AT (2 meter HT) I decided to get another bearing....I traveled west out to Shawnee and stopped in a park near Shawnee City Hall, off Johnson Drive for my next bearing. Using my hand and arm as a shield to the rubber duck antenna, I picked up a null to the Northeast that made me think the signal was somewhere near the county line. So, I ventured into the Wyandotte County area in the Highland Crest area for another bearing. This time the bearing was due South. So, now I have it narrowed down to a few square blocks. As I moved into that area, the signal was really strong and my technique no longer worked, because I was getting saturation in the signal. At this point I removed the antenna and resorted back to the original technique. As I drove up and down a couple of blocks I realized the signal was not easy to pin down. Finally I turned down a dead end cul-de- sac… And there was this monster-sized tower. Looks like a ham to me, I thought.

We all had a great time at the SEKARC Christmas party Wednesday night! Good friends, good family and good chicken and yes I did see some beef on a few plates!! I think I might have too try a burger next time, that looked good !! Vivian was the star again and I do believe Tyler won the most creative gift award again! Tell us about that pig Adam?

Thanks again to you all for making this the greatest amateur radio club in the midwest!! Oh and be sure and check out a few pictures...... nice job Dilly Dilly !! 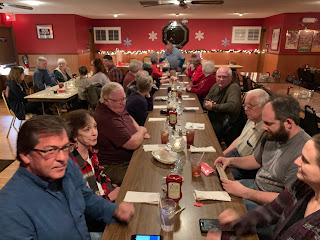 This is one option for the clubs UHF repeater. Please watch this webinar from John Kruk the sales manager for Yaesu USA. I joined the webinar last week and it was very helpful explaining the basics and how to set it up. We have the money in the club needed for it and in the near future we will be putting it to a vote. We have other options for purchasing like a generator but the more info we have the better choice we can make !

I think the WiresX option would be a fun addition to our options, but let's talk about it !! There is also another video below.. a review from the great K6UDA of the FT70 handheld fusion. Many here have one and a great entry radio into fusion.