Thanks Joe, and GOOD JOB !! Here are some photos from the talk and the slide presentation is available to view below! One of the methods talked about was Manhattan style and thanks to Romel KEØAKO we have more information on that !!

Ugly Construction has its variations and the Manhattan Style Construction technique has become very popular. Manhattan or "paddy board" style uses small square or round pads cut or stamped from PC board which are glued copper side up on a large copper clad board which is also placed copper side up. The small pads or "islands"  are used for anchoring non-grounded components. Components soldered to the pads such as transistors or ICs are not positioned upside down like in standard Ugly Construction. Many Manhattan style builders use IC sockets as well. There is a tendency to make these projects look very nice and this is a wonderful ground-plane bread boarding technique for builders who have the time and ability to do this."

Reminder... the February meeting of SEKARC will be Sat 2/28/15 at 9 am. Meetings are held at Fire Station #1 on West 4th Street in Pittsburg. Everyone is welcome, with or without a license!

We will have breakfast and coffee and Joe will be presenting "Electronic Building  Techniques" and will share along with others tips and ideas to make building/repairing easier, cleaner and safer!

The great folks at Amateur Logic have started a new show... Ham College and it's for new or want to be hams. But I am sure I can learn a LOT from it. Check it out and then follow AL on YouTube!! They also show some funny clips from their regular AL show. 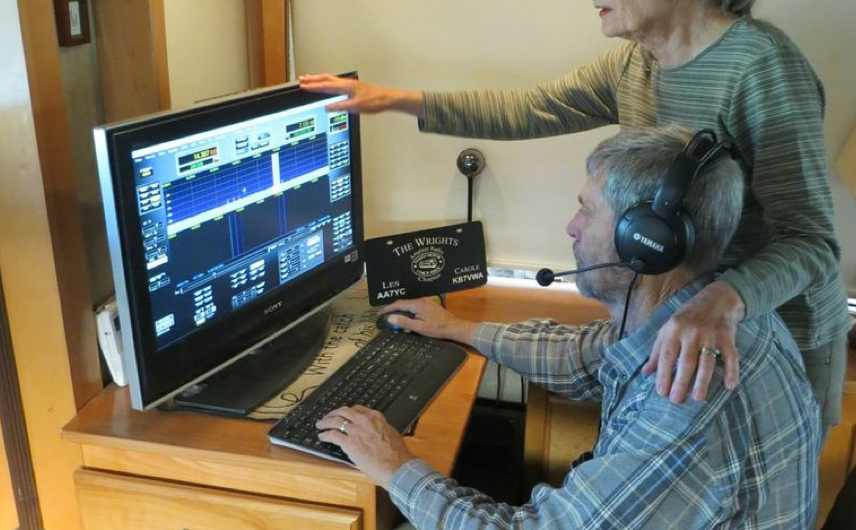 Nice story from an RVer. I know several of us have RV's and/or would like to. I think our stories are similar to this one! Click the site below for the whole story!

Thanks to the Internet and email, text messaging and Facebook updates, it’s easy to stay in touch with friends and family while traveling. But a very active group of RVers takes such connectivity to a whole new level, out-Interneting even the Internet when it comes to being able to communicate with the world.

They take their own radio stations with them.

Les and Carle Wright at the controls of their ham radio station in their 2009 Alpine Coach motorhome.
They are members of the Amateur Radio Chapter of the Family Motorcoach Association and their radio stations are ham radio transceivers that let them communicate with other ham operators from their motorhomes and, during the off season, from their sticks and bricks homes.

Email ThisBlogThis!Share to TwitterShare to FacebookShare to Pinterest
Labels: rv

Communicating with light instead of radio waves...

In early June, a laser beam lanced out of the night sky over California, heralding a breakthrough in space communications. The message it carried was "Hello, World."