The first SEKARC Foxhunt was a chilly success! The coldest morning of the fall but we still had over 10 hams and XYL's out hunting that pesky fox. We started the morning with breakfast and coffee at Hardee's while planning the hunt.

The previous post here had instructions for two antennas, the video was for a 2 meter beam and the photo was for a 70cm version. Several members had built the 2m version and those seemed to work really well! Steve N5SD had a vintage version of a foxhunt antenna which was interesting. John ADØKA had a homebrew as well with attenuater and other pieces.

Bill WBØLXZ built a 70cm beacon operating from a solar panel that he planted the night before and that one proved to be challenging to find but it did get found. One of the challenges with that one was that the frequency was published at 433.92 but with some solar power limitations it drifted down to about 433.6. 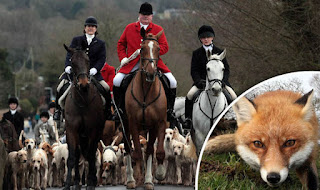 Get your horses ready and best red coat... SEKARC is having a FoxHunt this Saturday October 30th. The plan is to meet at Hardee's for breakfast and coffee. Visit, eat, drink and have a good conversation over a biscuit and coffee!

Then we will discuss the plans for the hunt. Much of this will be open for discussion so plan on being a part of it! At 9am let's gather at Hardee's, then around 10, after the plans are laid down, a couple of us will go to Lincoln Park and plant the foxes! Then about 10:30. the rest will leave and head to the park. Meeting in one place like maybe the parking lot in front of the band dome? I am not sure if there are other events in the park so we will be flexible on that. For last minute details and instructions monitor the .94 repeater for traffic regarding the hunt.

At the September meeting we planned having a foxhunt activity at the October meeting. So everyone knows what it is and can prepare, I am posting this Intro to Foxhunting. There are other videos on youtube so check them out and find a cheap metal tape measure at the dollar store !!

How I Learned Morse Code Fast

Here is a method for learning CW fast. There are many out there so give it a try! Joe and Jack would love to have some new CW join the slow speed net!

A new digital mode....... check this out. Options are good and digital has a BUNCH of options these days!!