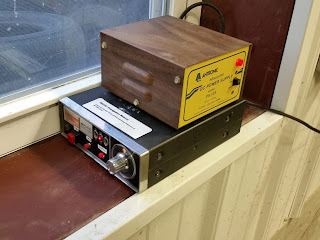 Here are the technical details from Tom!


My beacon consists of a converted Midland 13-882B CB, running 4W on
28.2095 MHZ. Converting the beacon was fairly straightforward.
I simply replaced the 11.275 MHz TX crystal with a 10.240 MHz
crystal which put channel 1 on 28.000 MHz and gave me six possible
frequencies to use in the beacon band. The beacon transmits by keying
the old microphone PTT line. The receive crystal was removed in order
to prevent any mixing spurs like I first had with my first beacon.
It operated on 28.233 MHz and I noticed spurs about 455 KHz above
and below the operating freq. Removing the crystal solved that problem.


After removing the mic jack of the CB and some unneeded wiring,
something must have messed with the circuitry because the transmit
power went down to virtually nothing. I could hear the signal on
an HF receiver but couldn't measure any power out. Luckily
I found a schematic online for it and tuned the slugs in the
transformers in the TX chain until I got a full 4W output again.

The beacon is coordinated with the region 2 IARU beacon coordinator.
He at first wanted me to put it on 28.2475 MHz, but after trying several
variable capacitors connected to the crystal I just could not get the
frequency to bend that far. I was able to bend it about 500 Hz, and
after looking at the 10m beacon list noticed that there was only one
beacon listed on 28.2095 MHz, which was listed as being QRT.
I suggested this frequency and it was okayed.

The keyer is a Jackson Harbor Press PK-4 chip, which not only works
as a great CW keyer but also has a beacon function. Only downside
to using it to key a beacon is that if it loses power it has to be restarted
upon powerup. Since the beacon is located at my shop in order to
minimize QRM at my home, it's not too far away to access it and
restart it if needed. 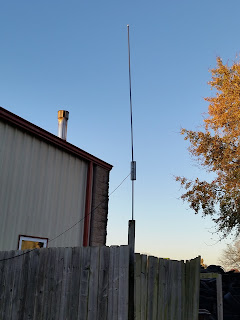 The antenna consists of a vertical dipole made from two ~8 ft. lengths
of conduit. The antenna was used on my first beacon for many years,
and after that beacon quit working I just left it up and connected it to
the scanner I have at the shop. Connecting the beacon to it, I noticed
that it had a fairly high VSWR across the entire spectrum. After
fixing some rusted contacts, it now has an acceptable VSWR and
works well. I hear the beacon at S9+10 from my house 1/2 mile away.