On Sunday May 28th, a group from the SEKARC volunteered at the Baja Kansas Endurance Race 2017 at Pitt State! Tyler KBØPOP. Jeff KAØEGE, John ADØKA and Gary Goddard operated dispatch for the recovery teams. It was a great event and it is being held next year at PSU so we will be helping again and welcome other folks to help!

Basically a car with issues would be called in by a spotter on the track with car number, and position marker (location on the track) and if they needed a lift and tow (example in photo below) or just a tow. Then the other part of our team would dispatch out the recovery crew to that location. It was a little like chaos at first but as the cars dropped out it slowed down a little.

Hat's off to the recovery team which I believe were from Alabama and surrounding states. They were great to work with and VERY helpful and made it really easy on us. They were from a trail riding club. They were also all volunteer and came a LONG way to do so !! To link to their site just click the image below!

Below is a promo video and then some other photos from the event! 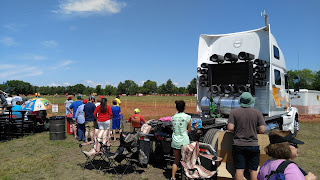 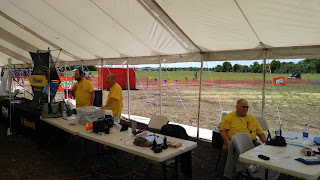 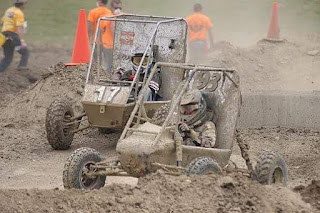