OzarkCon 2Ø16, a Premier Event for the QRPer. 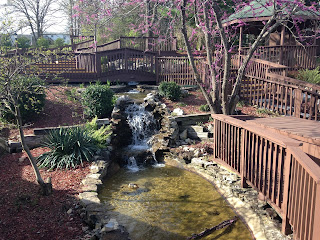 Another great ham radio event has come and gone for another year.  It was the largest one since the beginning with around 16Ø people attending this year.  There are always plenty of activities to pursue and arriving a day early I had extra time to play radio.  The first order of business was to setup the station in the parking lot for action.  This year I changed my operating philosophy and made my station completely operable from the driver seat of my van.  The antenna of choice was the 40 meter Ham Stick and a special bracket fabricated to facilitate "easy up, easy down". 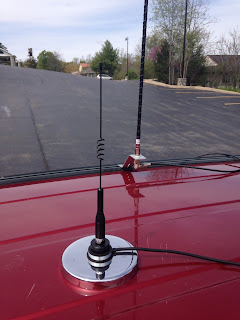 With a limited number of trees growing out of the asphalt this antenna solution seemed the most feasible.  In the foreground is the Comet B-1Ø UHF/VHF antenna and the Ham Stick in the rear.  The bracket holding the antenna is using one of the screws that holds the luggage carrier rack to the vehicle and makes a nice "no holes in the vehicle" mount.  It seemed to work extremely well using the van metal mass as a ground plane.  The station consists of an Icom 273ØA for UHF/VHF and an Icom 703 for the HF bands mounted on the console between the seats. 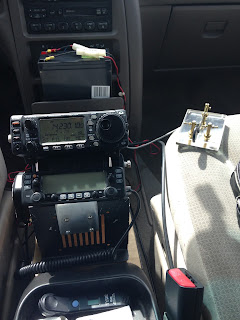 On the seat next to the rigs is my "Hacksaw blade" single lever cw paddle key.  Had lots of fun with plenty of stations to work in the area doing SOTA and other backpacking events.  There were also qrper's in the motel with the famous "Dummy Load" antenna ready for the "Dummy Load QSO Party" Friday evening.  The station performed well except for some oxidation on the hack saw blade, (at least that is what I blamed it on) causing some false and intermittent keying.

Friday evening there was a lavish dinner catered by Golden Corral.  The vendor room was open, kits sales were open, with a general theme of roam around and see what's there.  The Dummy Load QSO party was underway as well with Bart, W0IIT, acting as NC of special event station KØN.  I gave him the nick name of the Kon Man.  Following the dinner was a presentation by a tour group who gave out information on how and what to see in Branson.  The Build-a-thon also followed the dinner for those who signed up to build a small kit.  This event has been a favorite every year and it often has participants from 8 to 80 years old.  Assistance is provided on how to solder, component identification, and trouble shooting techniques by the Midwest Homebrewers and QRP Group. 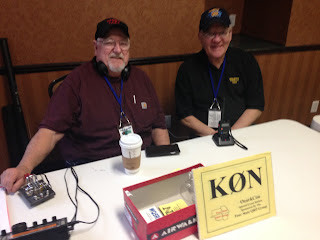 One of the big attractions each year is the Home Brew contest.  Below are some of the equipment entries. 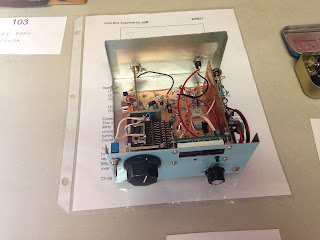 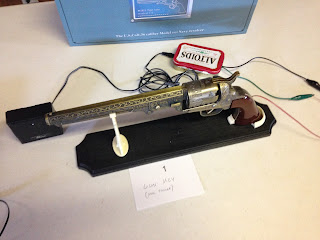 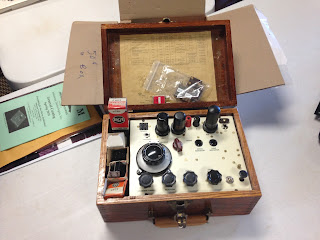 There were many works of art entered into the Home Brew Contest as well as the Wacky Key Contest.  The top photo is typical of the many receiver and transceiver designs.  The center photo is a pistol entered as a key paddle in the Wacky Key contest.   The pistol keyer was entered by Tom, N2UHC and was a hit of the show.  Yes, you could send cw by pulling the trigger and banging out those dits and dahs.   The bottom photo is a replica of the WWII Parasets used by the French underground and had the nick name "Spy Radio".

Saturday morning started off with a big breakfast catered by the hotel.  Scrambled eggs, link sausage, biscuits and gravy, a selection of hot and cold cereals, and hot coffee or orange juice.  The schedule Saturday was a busy one with the following topics covered.

As can be seen by the wide range of topics it was a very interesting and educational day.  All presentations were top notch and enjoyed by all attending.  Many prizes were given away during the day with a grand prize being an Elecraft KX3.  The total value of prizes this year was in excess of $5,000.00.   Saturday evening is usually left open for the qrper's and their families to enjoy a night on the town.  A group of us finished the day with a nice steak dinner at the Lone Star Steak House.

Sunday morning we were treated to a free breakfast by the hotel and we all left Branson with full tummies and a lot of beautiful memories.  I got to see a lot of old and new friends and enjoyed the weekend very much.  If you missed it this year, be sure and make plans to go next year.  It just gets bigger and better every year.  A big thank you goes out to all who labored the entire year to make this event a crown jewel in the Midwest.   Below are a few additional photos for your browsing pleasure.