Back On The Air... With A Twist

Well after 4 months of concrete patio/pergola installation, today I put my tri-band fan dipole back up. New location on the side of the pergola worked great. I began running the coax around the eve of the house and thought that I had better check the SWR on the antenna before I totally hide and attach this coax.

After a cup of coffee and breakfast, I go to the shack and fire it all up. Nice to be on the air fully again right? So I tune radio to 40m, and try the antenna tuner.... rattle rattle kerchuunk over and over and over. I know a lot of you know that feeling. Finally the tuner gives up with SWR OFF the scale. Dang I thought, bad coax? Too close to the new outdoor Wifi outlet? So I tune radio over to 20m... first try was the same thing. rattle rattle kerchuunk over and over and over but this time it stopped and settled in at 1.5 on 14.255.

Phewww I thought.... switched back to USB and tuned around and actually heard a signal from a station in California. Sweet so ok I guess I need to figure out the 40m issue. Then... the lightbulb went on! Surely I had the coax plugged into the tuner.... right???

Wrong.... so I plug it in and first try it tuned on 40m, 20m and 17m all at 1.1. So I found out that I can tune only my tuner to 20m at 1.5 swr and receive signals still. The Analyzer had it slighty better than before so the tuner easily handled the rest. Sometimes it's the silliest and simplest things that can make your day in ham radio... and mine was made today. like a wise friend of ours always says.... "Welcome to Ham Radio!" 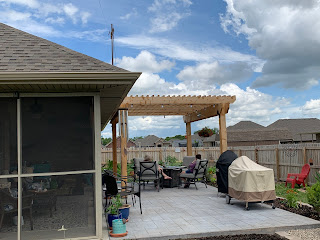 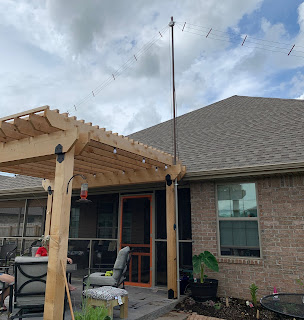