I thought that my recent activation of Parks on the Air K-1768 was unique enough to deserve a recap. As some of you know, I fly an old but still capable Cessna whenever I can and sometimes it allows me to mix hobbies…such as flying and activating Parks On The Air.  In this case, POTA K-1768 is the Lake of the Ozarks State park…and this is the story.

The short story was that the 40m band was unusually quiet that day, but the signals were almost all 59+.  On the POTA Facebook group, I expressed my many thanks to the 42 “hunters” who listened for me and worked me.  The pileup was very active and thanks again to N5HA for spotting on the clusters since my internet was, well, spotty. I was able to log 42 QSOs in 26 minutes, so can’t ask for better!

The longer story began with a very good weather forecast for the region, so I decided to take the plane out for a spin (figuratively) and see where I ended up. I thought I would look for breakfast at an airport diner, and then maybe end up somewhere that I could borrow a “crew car” and activate a nearby park. Many, if not most, small airports have a crew car that pilots can borrow to go into town for a meal, or for a 2-hour tour of the area.

Otherwise, no real plan, so I blasted off from my home airport at about 9AM. Getting on the radar with the successive air traffic controllers from Kansas City, Whiteman, and Mizzou was smooth and I decided to drop into Grand Glaize Airport(K15) in the resort town of Osage Beach, Missouri. I had heard that the town was walking distance from the airport. It was a typical sleepy small town airport…and the friendly airport manager pointed me to walk across the runway to the nearby mainstreet diner, where I found good pancakes and coffee for breakfast.

Returning to the airport to sign out, I noticed a map of the Lake of the Ozarks State Park on the wall and then I saw that there was an airport INSIDE the state park! You gotta be kidding me! The airport manager said it was a very quiet airport, but with a long runway and very large apron.

So, in the finest movie tradition of Tora, Tora, Tora and Midway…it was “PILOTS TO YOUR PLANES!”…I sprinted (perhaps an exaggeration…) to my plane and was climbing out of Grand Glaize airport within minutes. The Lake of the Ozarks State Park airport, Lee C. Fine Memorial Airport, was visible almost immediately, so I landed within 10 minutes and taxied to the edge of the huge apron next to a grassy open field…perfect! Except for one or two other planes parked closer to the “terminal”, it looked like I was going to be alone. While I was there, maybe one or two twin-engine planes landed, dropped off passengers, and took off again.

OK, I set up the antenna behind the plane on the grass, and of course, it made perfect sense to use the airplane’s rear stabilizer as my shack/desk. I had the sun at my back so the radio's display was shaded...all good! 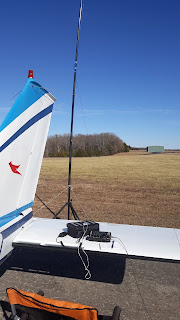 My cell phone showed no bars, but halfway through setup, I hear an email ding…I grab it and had just enough signal to send a spot to the POTA site before my bars faded…cell phone QSB, I guess.

I get the KX3 tuned to 7.229, and N5HA was waiting for me, worked me, and re-spotted me. From then on, it was a frenzied 59 pileup until I had 42 stations in the log. From the POTA database perspective, I was the forth person to activate the park, ever, so in the greater scheme of things, the park is somewhat “rare DX” and eagerly hunted when spotted…which is what makes park activation fun.

The wind had kicked up and toppled my antenna once during the pileup, so I decided that I had satisfied the park activation criteria and it was time to pack up and leave. But, as I had done many times after the pileup subsides…I leaned back in my chair and just took in the sounds of nature (and airplanes), relaxed, and played tourist for a while. Nice place…worth the trip.

Shortly, I was climbing out of there into the blue sky and getting picked up by the Mizzou and Whiteman Radar Air Traffic Controllers was quick and easy. I had to trade my higher-pitched “contest/pileup voice” for the baritone drawl of “airline captain”, but hey, when in Rome... At least, I didn’t have a brain slip and blurt out my amateur callsign to the air traffic controller instead of the airplane N-number! (I know someone who did…)

Anyway, a bit different from the usual activation, and it was fun to mix two hobbies on a sunny day in the Ozarks!

Email ThisBlogThis!Share to TwitterShare to FacebookShare to Pinterest
Labels: Parks On The Air, pilot, POTA